The projects and activities of the association have captured the attention of the mainstream media in the motorcycle industry and the disabled, but not only.

These are some of the major publications that have talked to us:

The institutional sites of the City of Rome and the Municipality of Turin, as well as Italian affairs.

The main titles of the motorcycle industry, both print and web: In sella, Motociclismo, Motosprint, Due Ruote, In Moto, Motocorse.it, Moto.it, GP One.

Under the motorcycle television channel AutoMotoTV (bouquet Sky), has sent 6 episodes of about 20 minutes (plus repeats) with the record of the race weekend of the Team Di.Di .; some episodes have been aired also by Nuvolari.

For the web, the week after the race weekend, the web Motosprint.it public not only videos relating to the chronicles of the races Team Di.Di., but also all the related events that the Association has organized itself (the proof of the motion of the boys Di.Di. by famous drivers, and the baptism of the track at Vallelunga on Annalisa Minetti tandem led by two-time world champion Manuel Poggiali; evidence of another Paralympic athlete Fabrizio Caselli, the two-seater driven by Chiara Valentini; Courses School Guide Di.Di. on the track and in the paddock, with Manuel Poggiali and Dario Marchetti, at Mugello, the Di.Di.Day, a day of solidarity aimed at taking on the track, as passengers, disabled children).

Even cameras Ability Channel, the web portal dedicated to the world of disability, they wanted to interview our guys for their video-news in the episode of 12 October on the occasion of the Milan Fair “Reatech” dedicated to disability. 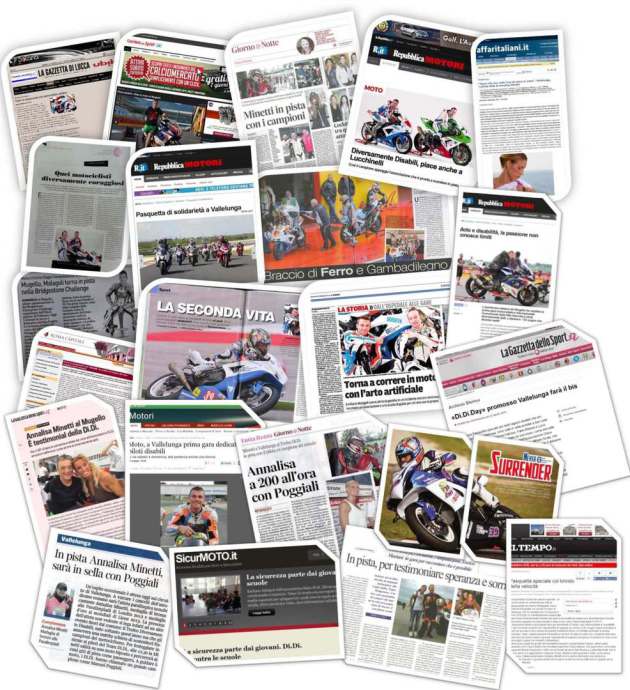