Composed solely of people with disabilities (amputees, injured plexus, dentures, hearing-impaired, monocles), the Team has deployed on the track, in these 2 years, about 30 riders. (here our riders)

They run in the Bridgestone Champions Challenge (Italian Cup circuit, recognized by the Italian Motorcycle Federation), along with the able-bodied, finishing in the overall standings (they also have a classification reserved) in excellent positions, despite their disabilities.

From this year onwards, given the many requests received from disabled children from all over Italy to be able to deploy in the Team Di.Di., some of which do not, however, have never raced on the track, we decided to organize competitions reserved exclusively to them, so as to ensure maximum safety for all.

Thus was born the “Di.Di.Bridgestone Cup", the first race in the world composed exclusively of disabled children, which was held at the Vallelunga circuit on 11 May. Here the video of the event.

The great success of the initiative, and requests for disabled drivers foreigners to attend one of our meetings, we were pushed - in spite of the great difficulties bureaucratic and logistical - to organize another grid reserved for drivers with disabilities also aimed at drivers foreigners: the “Dream World Bridgestone Cup", which took place at Mugello August 24th 2014, and at Vallelunga on 6/7th June 2015.

An incredible success for this event, which has gone beyond the sports results, which saw the participation of about 20 riders over numerous testimonials, including: Lucio Cecchinello (LCR MotoGP Team Manager as well as Honorary President of our non-profit organization), Alex De Angelis (NGM Forward team rider in MotoGP), Fabio Massei and Massimo Roccoli (pilots respectively of the World Superstock 1000 and Supersport 600), Giovanni di Pillo (sports commentator for the most important Italian television) and our godmother Annalisa Minetti, singer and Paralympic athlete who is blind, 3rd place at the Paralympics in London. Here is a short video of the race, and here the photos.

To reward the efforts and achievements, Genesio Bevilacqua, Team Manager of Althea Racing in Superbike World Championship, wanted to reward the President of the association Di.Di., Emiliano Malagoli, organizing them an exclusive test with the Ducati 1198 winner of the World stock 2011 with Davide Giugliano, September 22 at the Vallelunga circuit. In 2016, Emiliano will be an official rider of the Althea BMW Racing Team with a wonderful BMW S1000RR! 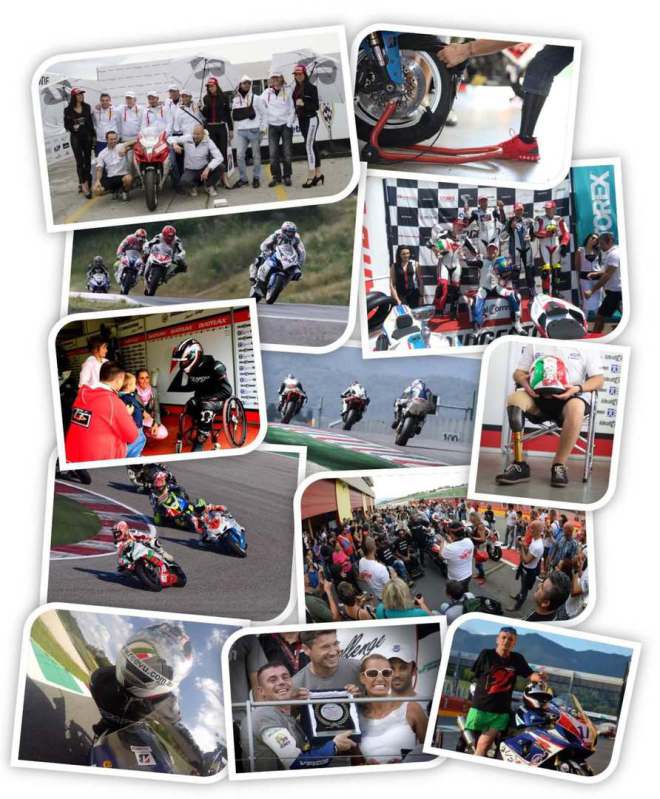